Until last year when I started walking, I was never a runner. Even as child before my chronic pain condition started and I was using my wheelchair, I was never a runner. I remember at a school sports day, I must have been about 8 years old and the other children were already at the finish line, as I approached the halfway mark. As the teacher blew her whistle and shouted our commands for cross-country, I would immediately feel a sense of dread. So how did I turn from a child that was unable to even run away from the word ‘running’ to an obstacle course runner?

“Following the successful 2019 launch of Spartan Trail in five countries, we’re excited to expand our experience and As a child I was severely overweight and unfit. I loved sport in general and the team element but I never had the endurance, speed or strength to play in the A team. When my chronic pain condition turned me into a full-time wheelchair user, I noticed how much faster I was able to move but also how the attitudes of others would limit my abilities. At school, I was severely bullied and would often be tipped out of my wheelchair. For University, I moved to London and was surprised as to how I was keeping up, as well as overtaking, standard ‘London pace.’ I was adamant to lose my extra weight, in order to allow myself to move my wheelchair easier. I joined a gym and my confidence started to grow and through knowledge, I was able to enter the free weight area and adapt able-bodied movements and exercises. I had connected with the adaptive athlete community and was starting to be a part of a community that I could have never imagined.

A friend of mine decided that he wanted to do a Tough Mudder and I thought that I would also give it a go. Despite not being able to get my foot wet or wear shoes or socks, I completed the course and after over a week in bed in pain, I decided to book into another.

My strength was increasing while my weight was decreasing and physically, I was in a fantastic place. My self-confidence was growing despite my debilitating chronic pain. I decided to look into wheelchair racing as I considered myself to be pretty fast however after a month-or-so of wheelchair racing, it was too difficult with my foot: the wind and the rain at the racing speeds were too much and I subsequently ventured out into the field section of the athletics club. I started throwing the discus and javelin and immediately fell in love.

At this stage, the doctors were adequately convinced that I was ready for amputation and subsequently my training was put on hold while I recovered from my foot amputation. Unfortunately, my recovery did not go as planned and I had to go privately to receive support in prosthetics. As it had taken 6 years of planning for my amputation and fighting with doctors, I had undertaken a lot of research into the possibilities of amputees both with and without prosthetics. Now I was fitter, I was adamant that I was going to prove the bullies wrong from my school years and I was going to run. I didn’t care what speed I would be or how far I would go but I was determined.

After my amputation, my energy levels rocketed and I had the required energy to be able to train harder. I bulked up heavily and decided that I wanted to enter another Tough Mudder, given that the mud, water and wind wouldn’t now be an issue. I completed the course on an iWalk (a leg brace-type device where weight is distributed through the knee) as I was unable to use my prosthetic and eventually moved up to walking with a prosthetic and crutches. 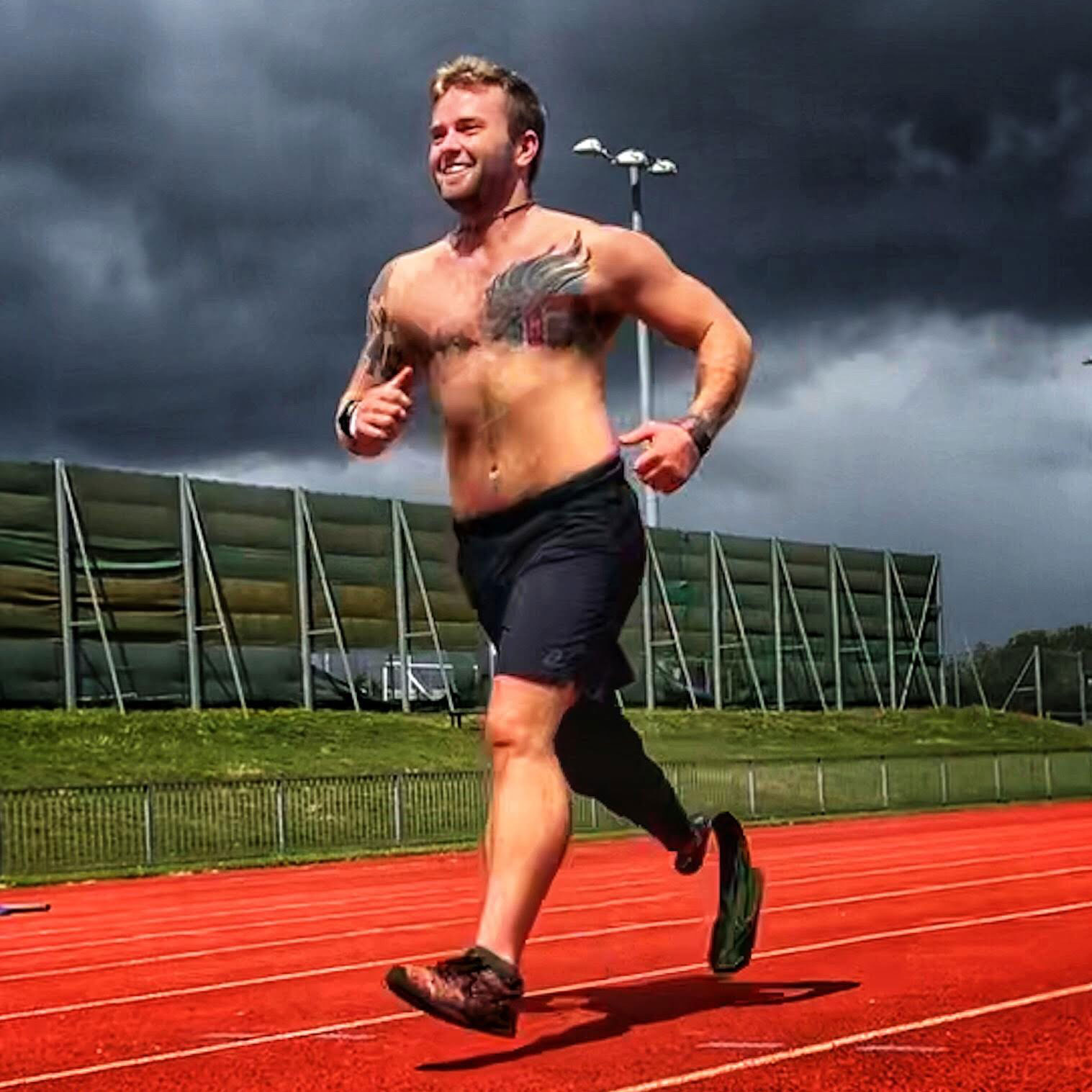 I was ready to progress and very kindly, I was given the support of Blatchford with a Blade XT (running blade) to allow me to run. Just two days after receiving my running blade, I decided to take it out for a 10-12 mile run in a Tough Mudder. Unsurprisingly, my time on course started to dramatically reduce and I started to enjoy the experience at a completely different level. At the start of the season, I had finished the course in about 7/8 hours whereas by the end of 2017, my personal best was 2.5 hours.

People used to run past me and pat me on the back, telling me how I was an ‘inspiration.’ I’m now able to out-run those individuals and keep up with my other running buddies. I entered this community, as with the Asics Frontrunner community, that I don’t want to let go.

Entering the Asics Frontrunner team was really the first time that I felt I could classify myself as a runner. I had this image in my head of the likes of Usain Bolt or Paula Radcliffe while in reality everyone can be a runner. Whether you’re going for a 10k PB in two hours or 30 minutes, it’s about whether you class yourself as a runner.

Despite years of obstacles, I decided to take on more obstacles through obstacle course racing. After all, isn’t life just one big obstacle?